Close call with Molly, and Moving into the studio

It has been a wild day today! Everything started out alright; I took Molly for our hilly walk despite the temperature hovering at 28, mad Tim a hot lunch and then started helping him in the studio. We left the door ajar between the studio and garage and Molly decided to escape. The garage door was open because Tim had moved some stuff out to the driveway to be able to get at the furniture. Out she went with me right on her heels, calling for her to come back. Usually, she will turn around and trot back, but she saw something chase worthy and took off through the woods, down the hill to the road like her behind was on fire! I'm running (if you call that running...) and calling her frantically because I hear a car coming up the hill. Tim jumped in the truck and started to follow me just as the car came around the curve and slowed to a stop. The door opened, and the nicest lady was trying to get Molly to come to the car. "Is she an indoors dog?' she asked as I puffed my way to the road. I told her that Molly had never bolted like that before, thanked her for her help and introduced myself. Turns out she is my next door neighbor. She said if I ever see a Yorkie running like that to catch her and bring her home! I said I would and thanked her again. We have nice neighbors, so far!
Back to the studio, where Tim is putting things together slowly and we are getting the space figured out. It looks stark without the colorful fabric and quilts on the walls. Pretty soon it will spring to life with a rainbow of happiness. Now, it's time for supper. Everybody is hungry after the chase and the big move. Even Molly!

Inching closer to a finished studio!

Molly and I went off early for our walk, and it was a good thing. The temperature plummeted this afternoon to 22 degrees! We took the low road today, walking down to the entrance and then down Rich Gap Rd. until we got to the horse paddocks in the valley. The horses were there and inquisitive about our presence. I don't think they see many people on foot!

This afternoon, I made a quick trip to the fabric store again (that makes three trips in three days!) to get border fabric for the quilt I made. Then, I checked in on the studio progress. What a surprise! They will be finished tomorrow, and we can bring in the machines. Woo hoo!


Puttin' on the woolies tonight! It should be very cold and windy, according to the weatherman. Below zero tomorrow. Brrrrrr! Until then, stay warm and I'll post tomorrow. 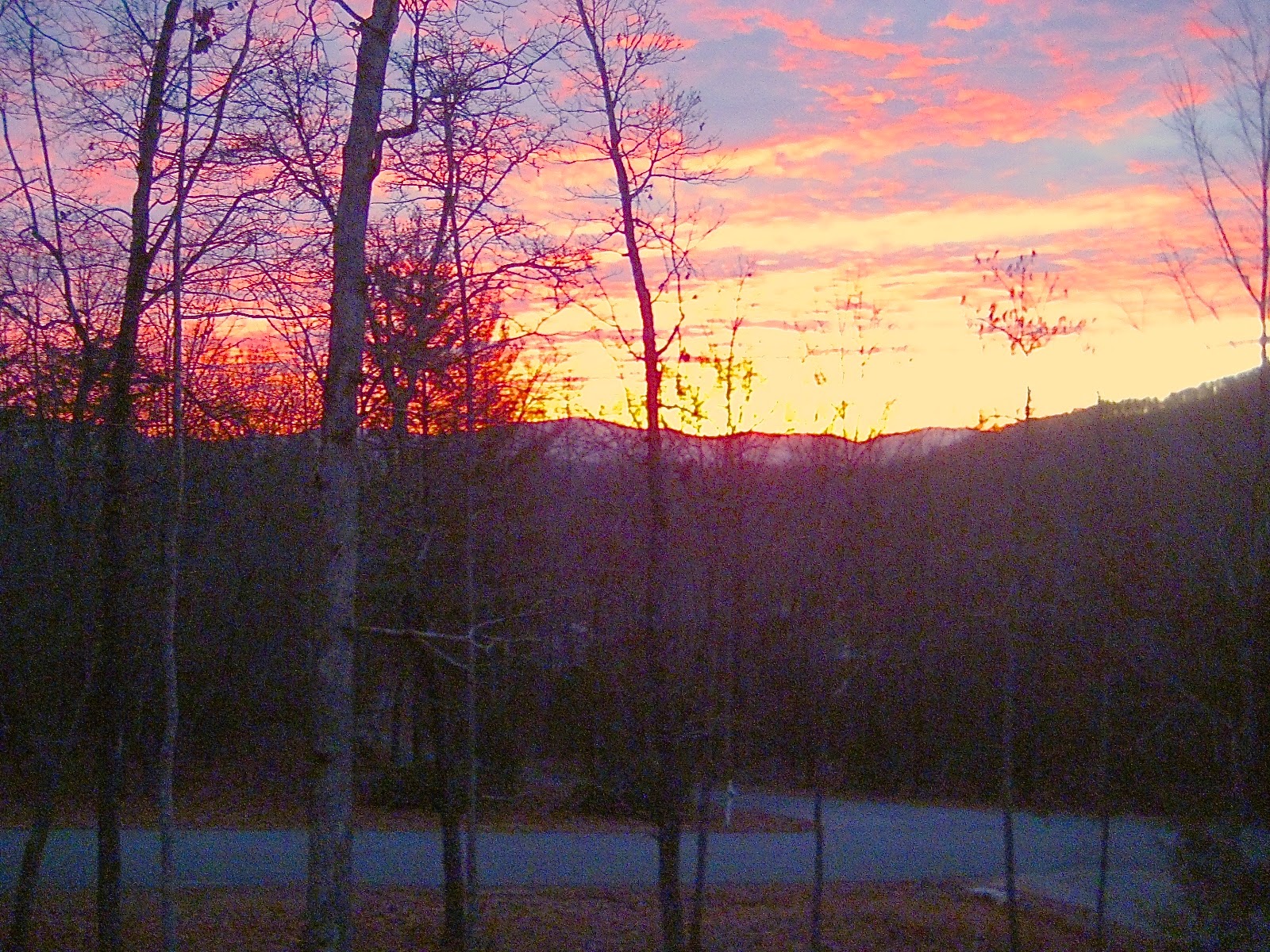 Two posts in one day?! I can't help it, I just got back from today's walk with Molly and felt I had to share.
Yesterday it was cloudier but not too bad. Tim stopped so I could get a shot of the house from Rich Gap Rd..

One of the things I love about the mountains is how they look different every day. Sun and shadow, fog or rain, always subtly different. Even in the brown of winter.


Once we got home, we checked in on the fellas and were surprised how far they had gotten on the floor.It is looking good!


Posted by WAZOO! Quilting at 5:15 PM No comments:

Sewing at last, and a new floor going down!!

After another trip to the fabric store to buy a ruler (I already have just about every ruler known to man) I finally had something to do that involved sewing. I watched the Houndstooth Quilt tutorial on Missouri Star Quilt Company's site, and decided it looked like a fun and easy project. I chose the vanilla Moda fabric and the double pink civil war fabric to make it from. Out of my box, but inexpensive for a first project here.
I set up the cutting area in the kitchen where there is an island just the right height for cutting. There are only two preliminary cuts, so it moved along quickly. I sewed the strip sets and cut the pieced blocks out, and then it was off to the races!


I set up my sewing area in the guest room next to a window so I could look outside. Its tight, but works okay. 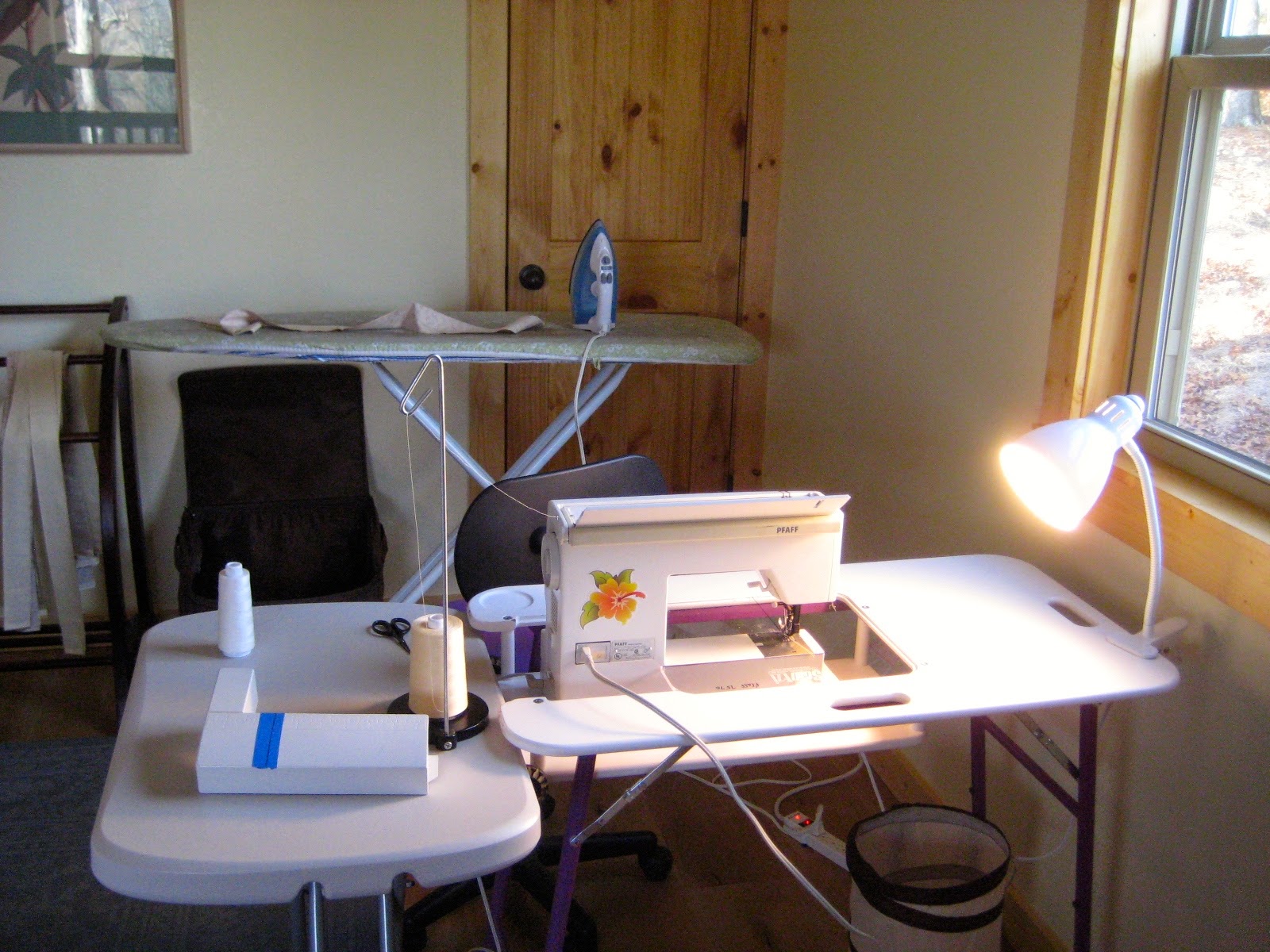 Today, I am sewing the rows together. I only had four of the stripy blocks left over, and had to cut two squares of each color to finish the top! There wasn't much fabric left, that's for sure.

Meanwhile, the flooring finally arrived! Tim and Mike are down in the studio as I type putting it down. I am so excited, I can hardly stand it, but have the quilt to keep me busy until they finish. Maybe tomorrow we will be able to get some of the sewing stuff into the studio. Yippee! Now, its back to the sewing table.

Posted by WAZOO! Quilting at 11:13 AM No comments: