A flimsy finish, a rescue, and a surprise road trip


I am happy to say that after months of work, I have the triangle applique quilt up to flimsy stage! It's a top, a flimsy in the quilter's jargon. Now, it is in the line to be quilted. Two down, two to go. I have 31 days to get them done. Yikes!

Mr W has been working hard and finishing quilts right and left, but I had the phone with me in Wisconsin, so there are no photos of them. You'll just have to take my word for it, he did four quilts while I was away, and all of them are gone home to their makers. He did this one yesterday because he needed me to sew the backing together first. Christmas in August!?

As for the rescue, Mr Wazoo came dashing in to get me for a dilemma outside. He was watering the pot on the porch when three baby birds all jumped out of the plants and onto the porch. He was so startled, he ran to get me o help him get the birds back into the nest in the pot. Mama was chirping and flying from bush to bush frantically the entire time we dried off the nest gingerly and scooped up babies with a dustpan. What a fiasco!! We'd put one in and another would jump out. It took more than a few minutes to get them to stay put. All the while we were running around bent over and trying to scoop up the birds, Mr W's pants were slowly falling down. I laughed out loud when I saw his jeans almost off, and his undies showing Gansta' style. Every time he bent over to get a bird, they fell down a bit more. I wish he would use the suspenders he has just for this reason, but he won't. Oh yes, it is his 75th birthday today. He did his good deed and everyone was happy. Mama went to the flower pot right after we got the last baby put back, and stayed there, I'm guessing to scold the chicks and fluff up the soggy nest.


Earlier in the day, I got a call from a friend who wanted someone to ride along to Ringgold, GA to a quilt show. I'm not one to miss a show, although I had neither heard of the town nor the show. What the heck, it was just a short trip. The show was small, but nice, held in the town's train depot. When the train goes through, it is about ten feet from the building! A surprise to show goers unfamiliar with the town. It didn't take long to see everything on offer, and we were home in time for me to load and start a huge quilt. I'll work on it while I do other sewing jobs, and probably won't finish it for a couple of days.


Posted by WAZOO! Quilting at 1:02 AM No comments:


I'm back in Georgia. I have to go back to work. But first, here are some more photos of trip stuff. 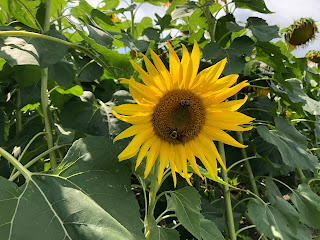 Back at home, I unpacked my goodies and went back to work in the studio. I miss Wisconsin already...

We'll be back to quilting tomorrow. I worked on the final border of my triangle quilt, and should begin quilting my show quilts soon.