Thanks for the memories!

The year is coming to a close, and we are so thankful for the friends, family and customers we have here at Wazoo. Mr Wazoo is on the mend. He will have an MRI of his shoulder next week and will probably not need surgery. It will involve some physical therapy, but he's good at following directions and recovering.
By this time next week, the kids will be here and we will be having fun getting reacquainted with the smallest one, who is now walking like a pro.

Last night, we had the Christmas party at my evening guild, where we had the installation of the new officers. It was a nice way to end one year and begin another.

The stockings are hung by the chimney with care, and there'll soon be the aroma of cookies in the air.


Posted by WAZOO! Quilting at 8:26 AM No comments:

(Written on 12/11 at midnight)
We got up this morning, think it was just another day at Wazoo. I watched a bit of TV, then went n a and took my shower. When I turned the water off, I heard the phone intercom ringing away, and ran to answer it and possibly chew Mr W out for buzzing me to ask about thread when I was wet and naked. On the other end was the quivering voice of the man I married saying he had taken a really bad fall and to come quickly. I pulled on some pants and a sweatshirt without even drying off and ran down to see what happened. Oh my goodness!! There he was, face all bloody and his clothes covered with yard schmootz. He told me his arm was badly hurt, but all I could see was the bloody face with his eye practically hanging out. I sat him down, told him to give me two minutes to get dressed and got an ice pack out of the freezer for the eye. Off to the ER we sped. (this is the least gory photo, taken in the ER after they cleaned the eye up a bit) 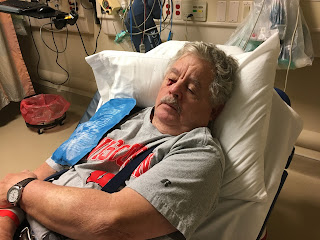 Time: 10:30 AM
It took awhile, but the nurse and ER doctor saw the man, he had X-rays and a CAT scan, got an IV and finally had a dose of strong pain killer. Concensus: he has to go to Gainsville where there is a trauma center and an Opthomologist/surgeon to take care of his eye. Oh goody...a Sunday trip over Blood Mountain.( the scariest, most winding, steepest road you'll ever drive on...but the only way to get anywhere from here in North Georgia) The patient had to go by ambulance, and I followed with the car.
Almost two hours later, we finally reached the hospital. I wish I had a picture to show you...very impressive place. 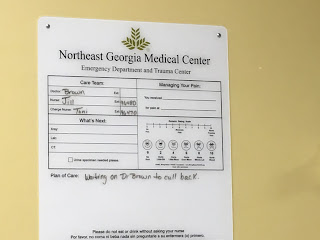 The trauma doctor and the ER nurse came and went, more X-rays, blood draw and questions. At around 2PM they came and said they had reached the Opthomologist at home and he was coming in. The Orthopaedic doctor got the new X-rays by internet (how cool is that?) and she would wait to see how the eye panned out before deciding what to do about the shoulder. Oh yeah...it's broken. Around 5PM the eye doctor came and examined the patient. He may need to go to Atlanta, says the doctor, and see the Opthoplastic surgeon. Oh please, no. Not another ambulance journey... Then, eye doctor says he has done the surgery before and will do it at the hospital if the patient agrees to it. By now, it was 7 pm and the man was not going to go to Atlanta.
The surgery was performed in the room and I was there for all of it. ( I even got to hand him a few things, since he knew I was a nurse and not intimidated by the surgical site) After a fascinating two hours, the eye was fixed and Mr W looked way better than he did at 10:30 this morning.
The orthopaedic doctor wants him to recover a bit from the eye trauma and see if some of the swelling goes down in his shoulder before deciding if he needs more surgery. We'll go back in a few days to find out the verdict.
The patient was given a pain med for the road and discharged at 9:30 pm and I drove us back home, over Blood Mountain...in the dark. We ate some leftovers...I had a BIG drink, and I tucked him in bed at 11: 30PM, thirteen hours after he fell on his head in the garden. You see, he loves his yard and gardens and had covered some tender plants the night before to protect them from frost. When taking off the covers, he lost his balance and pitched forward, taking a dive off a four foot tall retaining wall onto the frozen ground below. Whoopsie! That's what happened.
Okay, back to quilting. Yesterday, i finished the last of the Christmas orders, so we can take a bit of a vacation to shop and prepare for the kid's visit. Didn't work out like I planned, but at least Mr W is okay and we will have a Merry Christmas.
Isn't life interesting? Every day an adventure.