Another day in the books

I started bright and early to get a jump on the custom quilting. I trimmed the quilt from yesterday and took its picture. Nice!


By the end of the day, I had the center and one border done! A long day without a lunch break...in the zone, you could say. I should finish the quilt tomorrow. It is a beautiful pineapple quilt with over 200 fabrics used in the making. This customer makes gorgeous quilts. Her stash must be epic!

I quit around five and started working on a project I started yesterday. Mr Wazoo had a tee shirt thirty five years ago with a cartoon of some rats running a race. I loved that shirt, and wrote to the company who made the shirt for permission to make the cartoon into a quilt someday. I never got around to it until now, and I plan to finish it for the quilt show's new category, "Whimsical". I have three rats made, and two to go! The background will be quilted with the scenery.


Mr Wazoo was equally busy today, moving to the big machine, and grumbling about it the entire time. He had a bad night, you see. Miss Molly didn't like having the cone put back on and nipped him in the finger! She has never even growled at him before, so it surprised both of them. She trembled for an hour afterward, and he moaned and groused until he went to sleep. I hope she gets over the sore foot quickly. Too much drama. Anyhoo, here is the fruit of his labor.

Mr Wazoo worked until 6:30, ate some supper and went to bed. I hope tomorrow will be a better day! 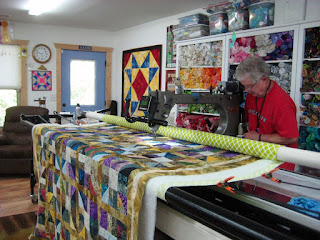 Posted by WAZOO! Quilting at 9:42 PM No comments:

It has been a whirlwind of activity here at Wazoo, and I barely have time to catch my breath! Mr Wazoo has had to be in the studio quilting, because he has been absolutely slammed with work. There are 18 pantograph quilts waiting for our attention, as well as two commissions and five custom jobs. Yikes! One lady brought eight quilts at once....yes, eight quilts! We'll be busy for a while. Our daughter comes back from her Wisconsin birthday trip on Tuesday, and she and Mr Wazoo leave for Oregon on Thursday to move her back to NC. Confused? We are usually confused, but just go with the flow.
Here are the quilts the man has finished so far.

The work on the back porch/deck is finished, and all that needs to be done is the staining. The builder says we should wait a few months for the wood to dry, since it is treated lumber. I hope Mr Wazoo can squeeze in the time to get the walkway put back together... 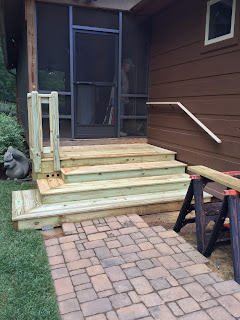 Meanwhile, poor Molly got bitten by a spider on her foot and had to have attention from a vet. A few hundred later, and the dreaded 'cone-of-silence', she is sitting in misery on her favorite pillow. Three different drugs, too.


As if Molly isn't enough, we have Maxine the cat to look after for our daughter. She hides under the bed, mostly, but comes out at night and bangs on our bedroom door, then runs away. What a prankster. We don't do cats, so I am baffled with her routine. Eat, poo, sleep, skulk around, sleep more.


Great news from the quilt show front! We submitted our raffle quilt into the guild contest from WRBQ Quilt Shop Navigator when we sent in our ad. We won!! Our ad was upgraded to a free full page ad, the raffle quilt (that I made and quilted) is on the cover, and there is a full page write up about the guild on the first page. Wow!


I have been working on custom quilting a One Block Wonder for a customer, and just finished it . I don't have a photo yet. I'll get it in tomorrow.

After hours, I have been making blocks for a Storm at Sea quilt. It is a project I thought I would never take on, only because of the size of the blocks...

Tomorrow, I start a new custom project and see if it goes along without a hitch. The last thing that happened today was the total breakdown of the Gammill Premier while Mr W was quilting. He did the troubleshooting and discovered the bearing behind the flywheel came unglued and was hitting the nut on the shaft with every turn. What a clanking noise that made!! Quick call to Gammill to find out this is a problem that can only be fixed at the factory. Great. Mr W will drive the machine to Atlanta on Tuesday, where Gammill has a truck pick up repairs once a month and take them to the factory. Its a good thing we didn't sell it. We still have the Classic Plus, so he will be using that machine for the time being.

Quick trip in the rear view

Yesterday morning, Kay and I left Blairsville and drove to North Port, Florida. We met up with my friend, Joan, who now has a new sewing machine! Everyone happy, we went to supper at the Myakka Oyster Bar, then said good bye. Today, we drove back to Blairsville. Helping friends is always a good thing, and is always rewarding.
Before leaving, I hand sewed the binding on the customer quilt Mr Wazoo finished quilting Friday morning. She came and picked it up while I was gone.


Posted by WAZOO! Quilting at 7:48 PM No comments: